The Baobab Planes of Canterbury


The "baobab" plane trees that can be found dotted around the city of Canterbury are distinctive as a result of their bulbous, knobbly trunks. These trees may be a clone of the London plane, but  have also been referred to as Oriental planes in the past and some confusion remains as to what to call them. Most recent advice from the National History Museum Identification Service notes this type as the baobab plane and says the unusual growth of the trunk may be the result of a viral infection, though this is uncertain.

I have been curious about these plane trees since coming across the tree in Westgate Gardens, which never fails to impress due to its enormous trunk (rumoured to have swallowed up a seat that once encircled it). It was not until recently on revisiting the Cathedral and seeing the plane tree in the grounds there that I decided to investigate them further. The Canterbury History and Archaeological Society (CHAS) listed five of these trees on their website in the following locations:

The tree in the grounds of Canterbury Cathedral has a plaque and is labelled as an "Oriental plane". The plaque reads: “This tree was supplied in the 1820s by William Masters, a Victorian nurseryman from Canterbury. This is one of five of the trees in the city”. This was confirmed on the Canterbury History and Archaeological Society website, which also notes William Masters as a likely source for the trees. 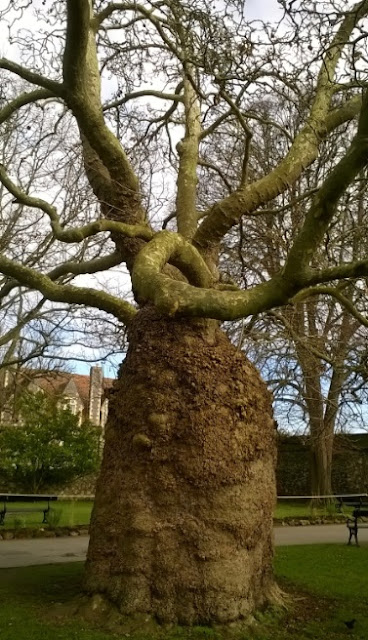 While researching online I found the information sparse - nobody seemed entirely certain of where the trees came from or what their significance was. As I was browsing the Kent Heritage Trees map I came across a listing for a London plane tree in the grounds of St Gregory’s Centre for Music. A photograph had been supplied and although the tree was overgrown with ivy it clearly resembled one of the baobab planes - I could even see the knobbles on the trunk. When I visited the site there was not one but two baobab planes; both very similar in appearance to the other five around Canterbury. In light of this (and curious) I decided to revisit the sites of the other five trees. 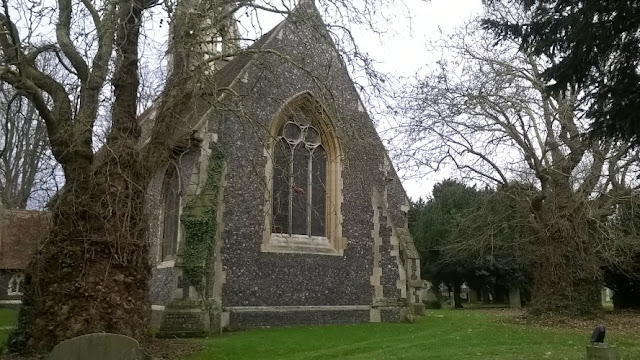 The largest and arguably most impressive of the plane trees can be found in Westgate Gardens. The Westgate Garden website notes this tree might be 200 years old and the oldest specimen in the country. 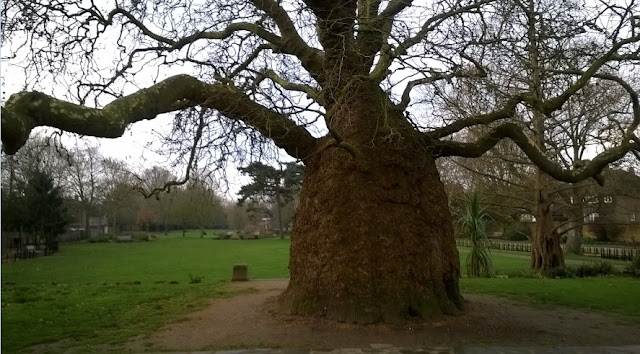 The baobab plane tree in Westgate Gardens by the River Stour

The tree by Beer Cart Lane is located behind a building – it is not accessible to the public but can be seen from the entrance to the car park of Furley Page Solicitors. The tree on Old Dover Road is not far from Vernon Place, next to a bus stop. 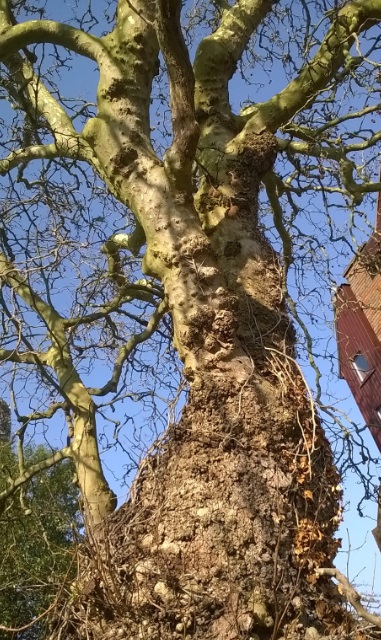 That several of these trees were located to the east of a Canterbury landmark yet their locations in relation to each other appeared sporadic, I found intriguing. In my online research (admittedly limited) I could find nothing to suggest that anyone had ever considered why the trees were planted in these places around Canterbury.

After plotting the trees on a map (including the two I discovered in the grounds of St Gregory’s) I found that the points made a cruciform, with the Castle tree being the top point, the Beer Cart Lane tree in the middle, and the two trees at St Gregory’s forming the base of the cruciform. 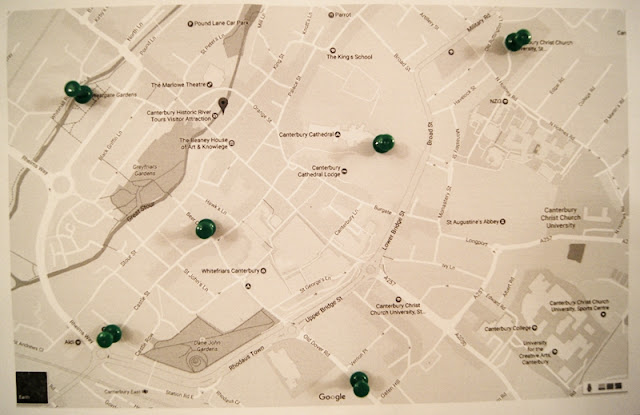 The "baobab" plane trees of Canterbury plotted on Google Maps 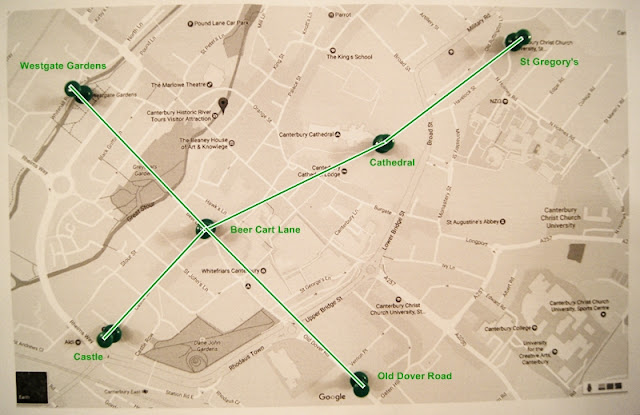 Again, with lines connecting the locations of the trees to form a cruciform

How old are the trees?

As noted above, the information on the plaque by the tree in the Cathedral grounds dates this tree to the 1820s. The tree in Westgate Gardens is also believed to be around 200 years old, suggesting a similar age. However St Gregory’s was built in 1852 and the two trees on the grounds of the church must have been planted at this time or after because of where they are located in relation to the building (its easterly corners). The advice given by Kew concerning the tree in the Cathedral grounds suggests that the tree there might date from around the turn of the century or before – but pre 1900. David Lewis of CHAS has informed me the plaque by the Cathedral tree is based on the contents of the CHAS website and is not based on historical records from the archives. So in short, no one is sure exactly how old they are but we can estimate they were planted around the middle of the 19th century.

It seems likely these "baobab" plane trees were placed around Canterbury with a purpose in mind. With William Masters being a landscape gardener, it could have hardly escaped his attention that when plotted on a map the trees create a cruciform in the landscape. Three of the locations are landmarks of historical and/or religious importance, though the other locations may also hold significance. Several of the trees are situated to the east of some feature in the landscape, which gives further religious implications as churches are typically orientated towards the east.

When considering why William Masters might have done this it is interesting to note his works around Canterbury more generally. Besides his exotic nursery, William Masters worked on landscaping church graveyards in Canterbury, Faversham and London. In 1838 he was also the curator for the Canterbury Museum, which was then located at the Philosophical Institution in Guildhall Street. The museum held a large collection of curiosities including antiquities and specimens of natural history. The Institution was later bought by the city and established as the Canterbury Museum and Public Library in 1858 before moving to the Beaney in 1899 and later to the Canterbury Heritage Museum in Stour Street.

There are several possible theories than could be derived from this. Based on my research I would think it highly likely Masters did plant these trees, considering his involvement with botany, landscaping and local history. It is possible that in planting the trees in these places Masters sought to link all the landmarks together in the landscape to celebrate Canterbury’s heritage. Alternatively he may have simply wanted to leave his own mark on the landscape -a sophisticated piece of horticultural graffiti- though he doesn’t appear to have left any record of his efforts. Either way, Masters managed to create his own curiosity – one that forms part of Canterbury’s history and seems to have gone unnoticed for around 150 years.

A connection to the Ravenscourt plane?

Having personally never seen any trees similar to these baobab planes, I did recently discover there is one in Ravenscourt Park, London - that tree is considered something of a curiosity too. The tree is very similar in appearance to the trees in Canterbury (knobbles and all) and again, no one is sure how old this tree is, but estimations vary from the early to late 1800s. Interestingly there are also ginkgo trees in Ravenscourt Park and it is known William Masters planted ginkgo trees close to the plane in Westgate Gardens, though this could be coincidence, especially as other examples of the baobab plane can apparently be seen in Brunswick Square and in the grounds of the Imperial War Museum.

Further investigation (and a trip to London) is needed here so watch this space!

If you have any further information regarding the trees I would be happy to hear from you. My email address is :
sadierhiannonpalmer@gmail.com